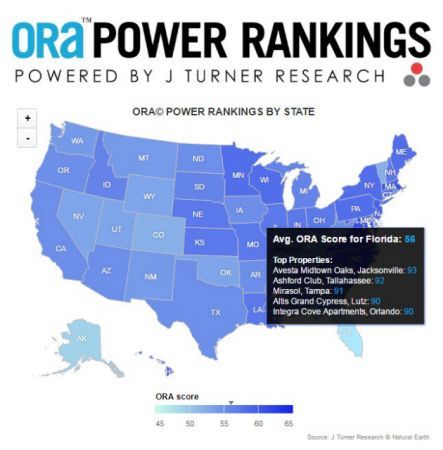 The Top 5 Properties for Online Reputation in The 50 States and D.C.

The credit for D.C.’s success goes to the property management firms operating in the capital. Out of the 421+ properties J Turner Research tracks for online reputation in D.C., WC Smith manages 74 properties—the most in the district. Its average ORA™ score of 67 is above the district’s average. Other companies who lead with the highest scores in D.C. include: Bernstein Management Corporation (78), Avalon Bay Communities, Inc. (77), Bozzuto, (75), Camden Property Trust (73), Gables Residential (72), and Kettler Management (67).

Thirteen states have enhanced their ORA™ scores by two percent or more—Maine, North Dakota, Connecticut, Idaho, Kansas, Maryland, North Carolina, New Jersey, Nevada, Ohio, Oklahoma, Utah, and Wisconsin. Each of these states scored at or above the national average, with the exception of North Dakota, Nevada, Oklahoma, and Utah.

In 10 states, all top five properties scored 90 or above. These include: California, Florida, Georgia, Massachusetts, Maryland, North Carolina, Ohio, Pennsylvania, Virginia, and Washington. Vermont had the lowest ranking property in the top five properties among all the states, with the property's ORA™ score at 41.

Six states have dropped their scores by two percent or more since March 2016—Hawaii, Louisiana, Montana, Nebraska, South Dakota, and West Virginia. With -3%, Hawaii saw the most significant drop.

Methodology
In an ongoing series of ORA™ Power Rankings, MFE periodically publishes a new ranking of apartment properties and management companies based on different parameters. The ORA™ Power Rankings is powered by J Turner Research. To arrive at the aggregated score, J Turner Research tracks and analyzes the online reputation of more than 59,000 apartment properties across all review websites on a monthly basis. To overcome the challenge of multiple ratings scales, the company has devised a statistical model to establish a single score for each property. This score, based on a 0 to 100 scale, serves as a benchmark to compare and contrast individual properties and portfolios nationally.